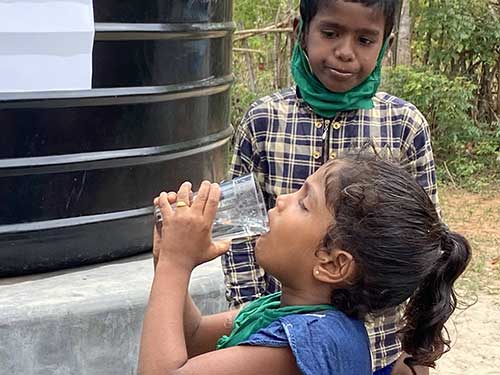 The Superhero of safe water sets her sights upon Poonakary

Shaan Corea is a woman with a mission. Like a human torpedo she wills her way to deliver on her one and only target: safe water for all who live in a desolate war-torn area in the North of Sri Lanka.

This is her story and it reads like the lyrics by rock superheroes Queen: “One dream, one soul, one prize, one goal, one golden glance of what should be.”

It’s a kind of magic. One woman. One mission. Shaan has single-handedly moved mountains of apathy and inequity to deliver the most basic of needs: water to the children and people of Poonakary, at the cost of a mere 9 US dollars per child.

Shaan is the founder of Re-Awakening Lanka/ Appé Lanka, which was started in 2015. Her goal is to empower the 25,500 people of Poonakary, a forgotten division of the Kilinochchi District in Northern Sri Lanka and epicentre of the 30-year conflict that ended in 2009.

“The people in Ponnaveli had undrinkable water” says Shaan about the situation in the first of 19 Grama Niladhari Divisions of Poonakary to become water secure thanks to her tireless work. The 2,000 people depended on bowsers to bring water to the villages daily. This was not always possible, due to poor road infrastructure and weather conditions. There was also no drinking water available to the 6,420 students attending school in Poonakary.

Shaan believed that the government would sooner or later solve the water issue in Poonakary but she was adamant that the issue needed to be solved immediately. Thus, since 2017 she has undertaken the task of making it happen, starting with giving safe drinking water to the schools in Poonakary. In August 2019 Shaan finished installing Reverse Osmosis Water Purification systems in 21 of the 24 schools in Poonakary. In addition, one of the biggest schools in the Division is getting drinkable water next week.

“People in Sri Lanka were shocked when they realized that there were areas like Poonakary that did not have access to safe water. The whole secret of Appé Lanka’s success is that people realised that they could give more than just their money, that they could give their talents, their resources or their know-how so that nobody goes thirsty. Once people believed in the cause, they wanted to join in and solve the problem quickly. Children broke their piggy banks… musicians sang… artists painted… celebrity chefs cooked… to ensure that the children in Poonakary have safe water all the time”, says Shaan about the reception and success of her project.

The project continued and was miraculously completed during the current pandemic. “During Covid, it was difficult for the team to go to Ponnaveli, but because we have trained the local people including a Field Officer from one of the villages, Seladurai Rajendran, they were able to manage and maintain the system on their own”, says Shaan about what allowed her project to continue during the pandemic.

“The moment we give them safe water, families are able to successfully cultivate their home gardens, making them self-reliant”, says Shaan about the positive effects that have come about due to their access to clean water.

Ponnaveli is a coastal town, thus the main source of protein is the fish they catch but they have to travel far to purchase the fruits and vegetables they need. The added vegetables from their home gardens will balance their diets and will no doubt make a difference to their health and nutrition.” Shaan also excitedly recounts how on a recent trip to Poonakary, young children invited her to have a meal with them with all the vegetables they had grown in their new home gardens.

“Ponnaveli is the first Grama Niladhari division in Poonakary to get safe water for drinking, cooking, cleaning and tending of home gardens. This is a case study, and since it is successful, we are going to be working in the Grama Niladhari divisions of Kiranchi and Mulankavil. The plan is to give them all safe drinking water,” Shaan says about her plans for the future.

“It is very nice-tasting water Madam”, and “Very good project, thank you Appé Lanka Water Madam”, the children of Poonakary tell Shaan as they hold her hand and share glasses of this beautiful water with her.

To paraphrase the well-known expression: “The Cape fits. Shaan wears it.”

We use cookies to ensure that we give you the best experience on our website. If you continue to use this site we will assume that you are happy with it.OkPrivacy policy